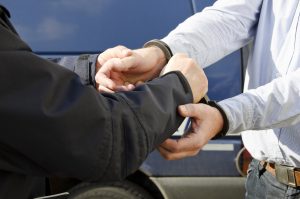 If you someone breaks the law using a motor vehicle, they can expect a form of punishment.

These can range from low level punishments, such as penalty points on a licence to fines and imprisonment.

When behind the wheel there are a number of offences that can be committed. They all come with a penalty and can ultimately lead to you being banned as a driver.

Every public road in the UK comes with a speed limit attached. If you go above this speed limit you are breaking the law and can receive penalty points on your licence and a fine.

The Highway Code details all of the speed limits for the different types of road. As a driver you should be very clear on what these limits are before you get behind the wheel. Failure to do so could end with yourself breaking the law and even losing your licence.

Using a phone while driving is illegal. From March 1st 2017 the law has been strengthened and those who are found driving and texting or using a hand held device will receive 6 penalty points and receive a £200 fine.

This means that new drivers (those who have been driving for less than 2 years) will receive an automatic ban. They will also have to retake both their practical and theory test.

Travelling without a seatbelt:

There is no doubt that seat belts save lives. Latest figures have found that wearing a three-point seat belt (with a strap across the lap and chest) reduces the chances of dying in a crash by 50 percent.

In the UK, wearing a seat belt is a legal requirement if belts are fitted. Drivers are responsible for children under 14 being in a restraint appropriate to their age and height.

Drivers are legally responsible for ensuring child passengers are belted up and in a restraint compliant with the law. Children up to 150cm tall should be secured in a child restraint suitable for their height and weight.

You can be fined up to £500 if you don’t wear a seat belt when you are supposed to.

You don’t need to wear a seatbelt if you’re:

Driving while under the influence of drink or drugs

This is still one of the biggest killers on the UK roads. Even small amounts of alcohol can affect the way that you drive and can affect your response times.

The legal blood-alcohol concentration (BAC) limit for driving in England and Wales is 80 milligrams of alcohol per 100 millilitres of blood (80mg/100ml).

However, there is no failsafe way to tell how much alcohol will put you over the limit, or to convert the BAC limit into how many units you can have: the concentration of alcohol in blood depends on various factors such as your weight, tolerance to alcohol and how much food you have consumed.

In the UK if a driver is found to be over the drink-drive limit, and/or driving while impaired by alcohol, they can receive a maximum penalty of six months in prison, an unlimited fine and an automatic driving ban of at least one year.

In the UK it is an offence to drive when impaired by drugs.  The police can stop and test any driver they suspect of being on drugs and can also carry out a drug test of a driver involved in another incident such as a crash.

Following the introduction of the new legislation in England and Wales in 2015, drivers caught and convicted of drug-driving can receive a minimum 12-month driving ban; a criminal record; and a fine of up to £5,000, or up to 6 months in prison, or both. The penalty for causing death by dangerous driving under the influence of drugs is a maximum prison sentence of 14 years.

It is illegal to drive a vehicle on a road or in a public place without at least 3rd party insurance. Even if the vehicle itself is insured, if you’re not correctly insured to drive it you could get penalised.

The police can issue with a fixed penalty of £300 and 6 penalty points if you drive a vehicle you’re not insured to drive.  If the case goes to court you could get:

The police also have the power to seize and in some cases destroy the vehicle that’s being drive uninsured.

This is the slang term in the UK for stealing and driving a vehicle. Joyriders are often under the influence of alcohol or drugs and are likely to drive at dangerously high speeds.

There are two laws relating to joyriding:

Taking a vehicle without consent (also known as TWOC-ing): This offence has a maximum prison sentence of six months and the driver can lose their license.

Aggravated vehicle taking without owner’s consent: This offence is committed when someone takes a vehicle without the owner’s consent and either drives it dangerously or causes damage to the vehicle. This offence can carry a maximum prison sentence of two years and a fine of up to £5,000.

More than one million road offences are caused on the road each year. To try to help drivers who break the law to change the way they drive, there is a National Offender Driver Scheme (NODRS).

Drivers who commit low-level traffic offences may be given the option to attend one of the NODRS schemes. These are offered at the discretion of the police who take in to account factors such as the circumstances of the incident when making their decision whether to offer the driver an education course.

There are a variety of courses that concentrate on different areas of driving, such as speeding and seat-belt wearing awareness. Drink-drivers can also be offered rehabilitation courses.