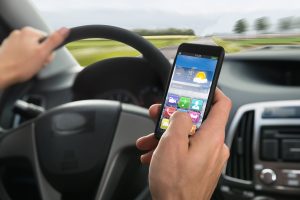 From this month (March 2017) new legislation has come into force which means drivers using their phone while driving will receive 6 penalty points and a £200 fine.

This is a new tough stance from the government and highlights how dangerous using a phone while at the wheel is considered to be. The new penalty is double what drivers would previously have received.

It also means that new drivers (those driving for less than two years) will be automatically banned from driving if they are found to be using their phone while at the wheel. They will also have to retake their practical and driving test.

The law has been strengthened to tackle the illegal use of using the phone while driving, which is referred to by the government as one of the ‘fatal four’. Along with driving at an excessive speed; failing to wear a seatbelt and drink driving, using a phone when behind the wheel is an activity which can lead to a fatality on the roads.

Research has shown that you are 4 times more likely to crash if you use a mobile and texting can be more dangerous than if you drink drive.

What you need to know about the law:

Ways to stop yourself from being tempted to use a phone while at the wheel:

To find out more visit our enforcement section.