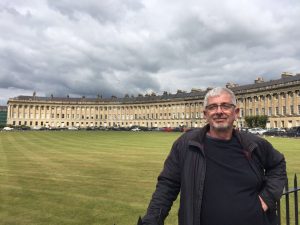 The work we have done is pioneering

I first started working for Voice as part of the Roadharm service.

I was in the Police for 30 years and for about 17 of those years I was involved in road death investigations. I was a Family Liaison Officer, and later the Family Liaison Coordinator for the Police, so I have worked with victim’s families for many years. That’s one of the reasons why when I retired from the police nearly four years ago I worked with Voice as the Roadharm coordinator.

I knew that a service specifically for the families of these types of victims was needed -because they involve bereavement or life changing injuries, the effect on the close family and friends is massive and very different from other cases we deal with in Voice.

I dealt with my first fatal road traffic collision back in 1988 and still recall the devastation it caused to the victim’s family, having to knock on their door and inform them of a death, and provide what support I could …. there was never really any meaningful support in available, not just in Northamptonshire but throughout the country.

When I joined the Serious Collison Unit in 2005, it was apparent that there still wasn’t really any support available other than that provided by the investigating officers. That was part of the reason why I was quite happy to become the Family Liaison Coordinator for road policing as I was able to ensure officers had the time they needed to spend with families who had suffered bereavement and to provide the support and advice they needed.

The Roadharm service has changed all that and I am very proud to have been a part of this from the outset.

Being in the Police has definitely helped me in this role

I am now a team leader in Voice, being responsible for the introductions team and specialist case workers.

The role is split into two: we get victims of crime referrals for the whole county from the Police on a daily basis, the introductions team are responsible for making first contact with these victims. The purpose of that call is to make them aware of our service, to tell them we offer access to emotional and practical support to help them deal with the effects of that crime and to establish if they want support.

We offer emotional support to victims to help them deal with the impact of the crime. We also offer practical advice such as personal safety, security, access to legal services… we also signpost people to other organisations such as Mind, IAPT and charities who may be more appropriate to the victim’s needs.

The other side of my role is managing the team of six specialist case workers. If a victim takes up the offer of emotional support, the contact team completes a detailed needs assessment that allows a specialist case worker – who is trained and experienced in supporting people who have been victims of all crime types – offers this support either face to face or by telephone, depending on the client’s needs.

The only crime types we don’t directly deal with are homicide and those involving children as we have another branch of Voice that deal with young people, and there is a National Homicide service.

On a daily basis I’ll be looking at all the victims who have been referred to us to see if there are any higher-priority cases, repeat victims, or for anyone we need to refer to another specialist service.

This role is very challenging at times and it has taken me some time to adjust from life in the Police to working in Voice however the experience and knowledge I have brought with me has proved useful in my current work.

I’m very proud of the work I did with Roadharm – I believe it was the first service of its kind in the country and I think it is fantastic what Voice did, and still does, for roads victims.

I think what Voice as a whole does is great and have no doubt we all help to make a difference to people lives. It’s about trying to help people in any little way that you can, trying to ease the load or reduce the worry or concern, to help them to deal with whatever has happened to them.

This for me is what makes the job I do so worthwhile and fulfilling.

When I’m not at Voice:

Not many people know but I… once worked in a gold mine in South Africa as part of my degree studies in Mineral Engineering at Leeds University –  an interesting experience to say the least at the time in the early ‘80s.

If I could watch one last film, it’d be… a tossup between “Captain Corelli’s Mandolin” and “The bridges of Madison County” – I am a bit of a sucker for love stories. Meryl Streep and Clint Eastwood would win as it’s a great film and well worth watching.

The people I admire the most are… This is difficult as there have been so many amazing people, both past and present. If I had to pick one, it would have to be my late father for many different reasons: for his own achievements in his private and professional life which were many and varied and for the guidance and support he gave me throughout my life. He was one of the kindest and most knowledgeable people I have ever known.

My favourite place on the Earth is… Pompeii and Hercalanum. I’m lucky to have travelled to quite a few places over the years, and many stand out including Dubrovnik, Elefonissi, Olympia, The Great Barrier Reef and Porto. However the most captivating and thought provoking has to be Pompeii and Hercalanum as you can feel and breathe the history, quite an odd feeling.

What makes me truly happy is… pottering in the garage restoring 1960’s British sports cars.