Home Blog Duncan Ward: a day in the life of a Road Harm Co-ordinator

Duncan Ward: a day in the life of a Road Harm Co-ordinator 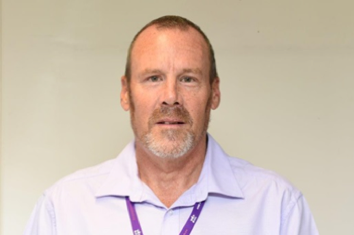 I joined the police in 1996 having spent a number of years in the army. Later, I became a firearms officer on the Roads Policing Unit. Armed response and traffic officers have always worked closely together, and I spent eighteen years on the armed response team, dealing with a variety of incidents including fatal and serious injury collisions – regrettably on a fairly regular basis.

Back then, I used to run every day, but I unfortunately suffered a knee injury in 2015 which resulted in me being unable to perform properly as a firearms officer. It was a tough time, but whilst in recovery I was placed in the serious collision investigation unit (the team that deals with the aftermath of fatal road collisions). I found myself really enjoying the role in the collision investigation unit; being front-facing and dealing with families, next-of-kin, witnesses and the friends of people who are involved in serious road collisions was tough but rewarding.

Due to a promotion within Voice, I was asked to cover the role of Road Harm Co-ordinator for a short time while the vacancy was advertised. It was a very easy decision for me, because I had already visited many people that had been so badly affected by collisions and I knew I could help make a difference in supporting them.  At the time, I was also approaching retirement from the Police.

It wasn’t long before I was sat in the Voice office being interviewed for the position of Road Harm Co-Ordinator. Thankfully, I was successful, and I’ve been here since September 2018.

When the opportunity to work for Voice arose, it seemed to be the obvious next step for my career. I’d already had the opportunity to go out with my predecessor to meet with victims of road collisions, and knew it was something I could do myself.

One of the most fascinating elements of working for Voice is that I see everything from a different perspective. As a police officer, you visit a scene, deal with the collision and, once the collision investigation team turn up, you pretty much leave it to them.

I always found this hard, because although I never forgot the people I met during those incidents, I rarely had any further dealings with them. Now, I get to see the difference that’s made after the collision by the support Voice offers and how it’s possible to change someone’s life just by being there for them.

For some, the discovery that Voice exists is enough to feel a sense of comfort. I’ve spoken to people who feel they’re coping ok without support but are safe in the knowledge that we’ll always be here if they feel the need to talk to someone. That’s such a rewarding feeling.

When a fatal or serious injury occurs as the result of a road collision (or something triggers emotional trauma – for instance, a road rage incident) and the victim feels they need support, they will either come to us directly or be referred by the police.

We provide one-to-one support for these people, no matter when the incident took place or what happened. And we deal with so many different cases – some of which aren’t always related to collisions. For instance, I once spoke to a lorry driver who had a brick thrown through the windscreen of his cab which traumatised him to the point of no longer wanting to drive again.

I also speak to friends and family of the deceased and some of the relations further down the line who often live out of the county. In those instances, I always see what I can do to direct them to the best support network available in their location.

Supporting witnesses is another big part of what we do. For instance, I might speak to someone who happens to be in the wrong place at the wrong time and sees a fatal collision take place on a road they use regularly. The ripple effect from road harm can be so far-reaching.

If there’s something I can’t help with, Voice has a brilliant contract with Assist Trauma Carewho are based in Rugby. They offer highly experienced one-to-one counselling sessions for victims and witnesses of road harm.

A typical day for the Road Harm Co-Ordinator

There’s not really any such thing as a typical day for me. It depends entirely on the incidents that occur each week.

I start most days by checking my emails to see if I have any reports from the Serious Collision investigation Unit. The overnight Police reports also provide me with details of incidents and I have access to the Niche and Web Storm Incident reporting systems used by the force. This enables me to find details about people who have been involved in road collisions. The Chronicle and Echo website is a great source of information on occasions, too; they’re usually quick to report any serious collisions that affect people in the county. I do the same with the BBC just in case they feature a story from outside of Northamptonshire where a victim resides in the county and may need to be supported.

I always attend the Coroners Court to support families and witnesses and also Magistrates and Crown Court if I know I am required to offer support there.

The daily checks enable me to get access to information quickly in preparation for any calls I might need to make. I often email the police officer assigned to an incident directly to get specific details about collisions in the county. This is where Voice’s close relationship with the police comes into its own. Officers that have actually been to an incident can provide a far more detailed picture of the incident and explain how and to what extent people were involved.

I spend most of the rest of my day either speaking to clients on the phone or heading out to meet them at their homes, workplaces or wherever they feel most comfortable.

The great thing about Voice is that we’re here whenever victims and witnesses need us. When it comes to Roadharm incidents, it can sometimes be incredibly quick (I’ve had calls from officers just hours after a collision and ended up meeting with the victim the same day), while some understandably need time to themselves and with their loved ones before they speak to us.

The people we support all have harrowing stories and the path to recovery is different for everyone, but even in the short time I’ve worked at Voice, I’ve witnessed some really positive, uplifting stories.

In one instance, I dealt with someone who had suffered serious injuries as a result of a road collision that wasn’t his fault. At the time, he was concerned about losing his job, paying the mortgage and providing for the family. It was an incredibly tough time for him and he was understandably angry because the collisions was someone else’s fault.

I spoke to him initially and ended up referring him to Assist Trauma Care. This resulted in him making an incredibly positive recovery, and watching this guy cope, recover and thrive from such a low point was both humbling and very rewarding.

In another incident, a client contacted our victim care team following an assault. My colleague quickly realised that there was something else behind his trauma, and it turned out to be the fact he was involved in a serious road traffic collisions some four or five years before.

He was subsequently referred to our team, and I went to speak to him. The assault he had suffered had triggered the trauma related to the road traffic incident, from which he clearly hadn’t fully recovered. This enabled us to support him on both counts, and is a brilliant example of how the team at Voice works together to provide the best possible support for people who need it the most.

We’re here if you need us

I completely understand that people may feel a little nervous about contacting a third-party support service like Voice – particularly after something as serious as a road traffic collisions. Speaking to a stranger about something so personal might seem like an odd thing to do, after all.

However, my advice would be to contact us whenever you feel ready. We offer free, confidential support that can genuinely change lives. You don’t need to be strong or feel that you need to show your friends you’re ok; sometimes you need to be selfish and, if you feel you need support, contact someone who can provide it. That’s why we’re here, and we’re going nowhere.

To contact the Road Harm team, you can email us, pick up the phone or fill out our online form. For full details, click here.

Not many people know but I… have three grandchildren all due between May and August this year !!

If I could watch one last film, it’d be… A Little Princess (1995) – a real tearjerker. My girls loved this film as young children and still love it today.

The people I admire the most are… my parents for so many reasons.

If it’s my turn with the radio, I’ll tune to… Heart FM – it’s on in the background now.

My favourite place on the Earth is… sitting on my garden bench in the sun.

What makes me truly happy is… riding my road bike to the top of a steep hill and still having the ability to speak when I get there. Eating a slice of  white chocolate millionaire shortbread at Salcey Forest café is rather good, too.