Home Blog 5 ways neighbours can be vigilant against crime

5 ways neighbours can be vigilant against crime 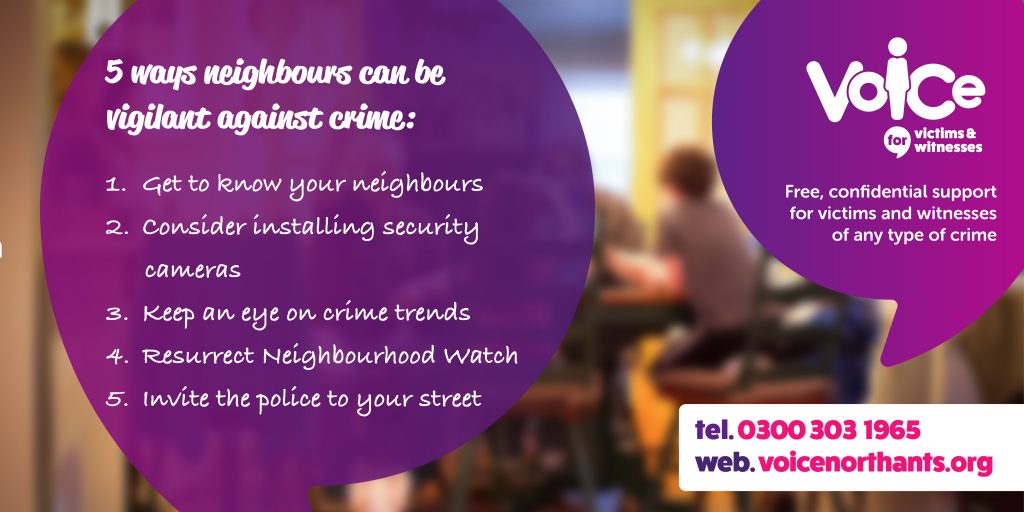 There are some neighbourhoods that experience more crime than others, but few locations can claim to be crime-free.

Even if you live in an area that is quiet, well-lit and historically safe, it’s inevitable at least one member of the community will experience crime at some stage.

With that in mind, we’ve put together five simple things neighbours can do together to be vigilant against crime.

1. Get to know your neighbours

This doesn’t mean living out of each other’s pockets, either, more creating a sense of community where everyone intrinsically looks out for one another.

Technology can be your friend, here, with websites like Nextdoor (or private Facebook groups) offering a platform on which to connect with your neighbours, share information and use the built-in, secure chat environment to discuss any concerns you might have about crime.

Britain has become known as a ‘surveillance society’ with an estimated 4.5 million closed circuit television (CCTV) cameras in operation.

Thanks to advances in technology, the cost of installing security cameras at your home has dropped considerably, and while such a device might not be at the top of your shopping list at the moment, it could be a very sensible purchase indeed.

The more security cameras clearly displayed in a neighbourhood, the more likely criminals are to give it a wide birth.

3. Keep an eye on crime trends

It’s probably not the sort of thing you’ll fancy doing while chilling out of an evening, but by occasionally keeping an eye on the crime trends in your area, you can stay one step ahead of any criminal activity.

Websites like UKCrimeStats enable you to search for crime statistics by postcode. A rise in bike theft, for example, is important information for the entire neighbourhood, and if you can spread the word, vigilance against crimes you’re more likely to encounter will naturally increase.

Devised in the early 1980s, the Neighbourhood Watch scheme rose to prominence a decade later and was intended to bring people together to make communities safer. It did a brilliant job, which is why the scheme still demands attention in modern society.

Try and get together with your neighbours semi-regularly to discuss how the community can remain vigilant against crime and – most importantly – share information that might prevent incidents taking place. You’ll be surprised by how many people are up for it.

5. Invite the police to your street

A representative from your local policing team is unlikely to turn down an invitation to visit the neighbourhood to discuss any concerns you might have relating to crime or anti-social behaviour.

You can certainly do a lot worse than ask, and if a member of the police is willing, a meeting involving them and your neighbours will give you all the opportunity to learn crime prevention tips, discover what crimes have occurred in the area and discuss ways you can all work together to protect one another.

Have we inspired you to reach out and encourage your neighbours to be more vigilant against crime? Why not be the first to bring your mini community together by using some of our tips above?